Self
Home›Self›Canine Cleaning: Cleaning up After (and for) Your Dog

Canine Cleaning: Cleaning up After (and for) Your Dog

Being a dog owner is often messy. Unlike cats, dogs don’t bathe themselves regularly, and depend on humans to help with that. Plus, dogs don’t use litter boxes and you need to clean up after nature calls. Fortunately, these cleanliness issues don’t outweigh the joys of being a dog owner, and there are several things you can do to make even these small hassles easier to handle.

Doing Away With Doggie Doo-Doo

Regular exercise is a key concern when keeping dogs happy, healthy and free from boredom.  It’s a good idea to have a plan in place for responsibly disposing of dog droppings your canine leaves behind during walks in public areas. Ignoring your dog’s presents contaminates the environment, and could even lead to a fine.

Purchase a scooper and some small garbage bags. Then, get into the habit of bringing both items with you on every walk, the same way you carry things like your dog’s leash and treats. If you often take your dog in the car in order to reach the place where you’ll go for a walk, keep a spare scooper and a few bags in your vehicle.  That way  you’ll never have to deal with realizing you’ve forgotten them.

Some companies sell special leashes that you let you stash plastic bags inside. There are also many other ways to responsibly clean up after your pet, including wrapping the droppings in newspaper or seeing if your community litter ordinances allow for flushing them down the toilet. 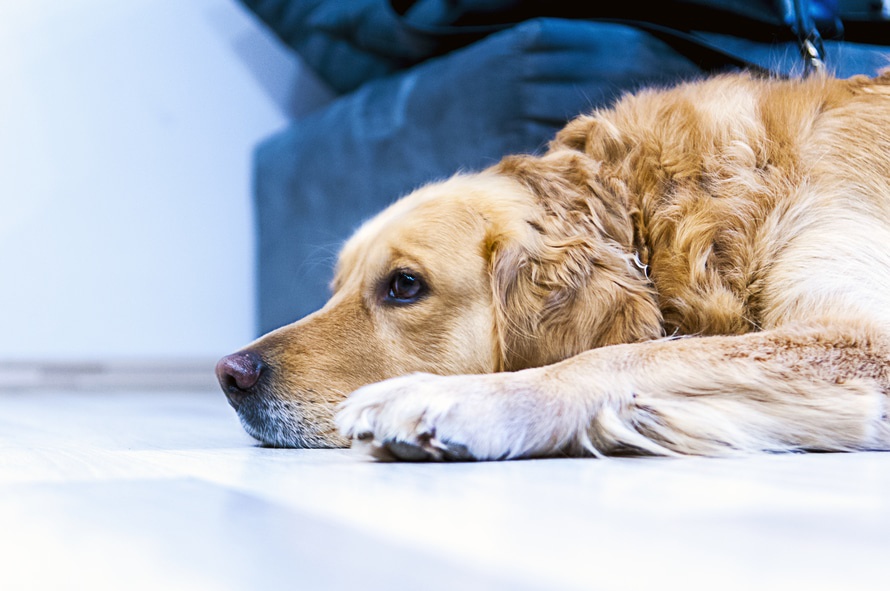 Your dog’s nose is constantly on the floor, whether they’re sniffing out crumbs in the kitchen, taking a nap in the office while you work, or playing with a toy in the living room. Those little noses can pick up smells and toxins we can’t, so it’s important to consider your pets when choosing cleaning supplies. Some conventional cleaning products are extremely toxic to pets. If you need to keep those kinds around the house, make sure they’re not accessible by curious canines. The following ingredients are especially toxic:

Seventh Generation is one example of a cleaning product brand that’s safer for your pets than many other options, and kind to the environment. Furthermore, the Method brand sells a nontoxic wood floor cleaner, and Mrs. Meyer’s Clean Day brand offers numerous products that are free from many of the dangerous ingredients listed above.

It’s also useful to get cleaning tools that are safe for your floors and your pets.  These include such items  as a microfiber mop and chemical free floor cleaners. The reusable mop is perfect for households with dogs, and it lasts an average of two to three years. Ideal for hardwood floors, this tool is an investment that lets you avoid wasting money and filling up your garbage cans with other, less durable options  like paper towels.

Besides using specific cleaning helpers that are safe for your dog, keep his or her toys, grooming products, leashes and other essentials all in one place. That way, fur from those items is less likely to travel all over the house.

Maintain the dog’s food and water bowls by wiping up spilled water and sweeping away scattered morsels your dog didn’t gobble up. Doing so makes the pet’s eating and drinking area look more appealing.   And, it may also encourage the animal to consume adequate amounts, since the water will be clean and food will always be available. 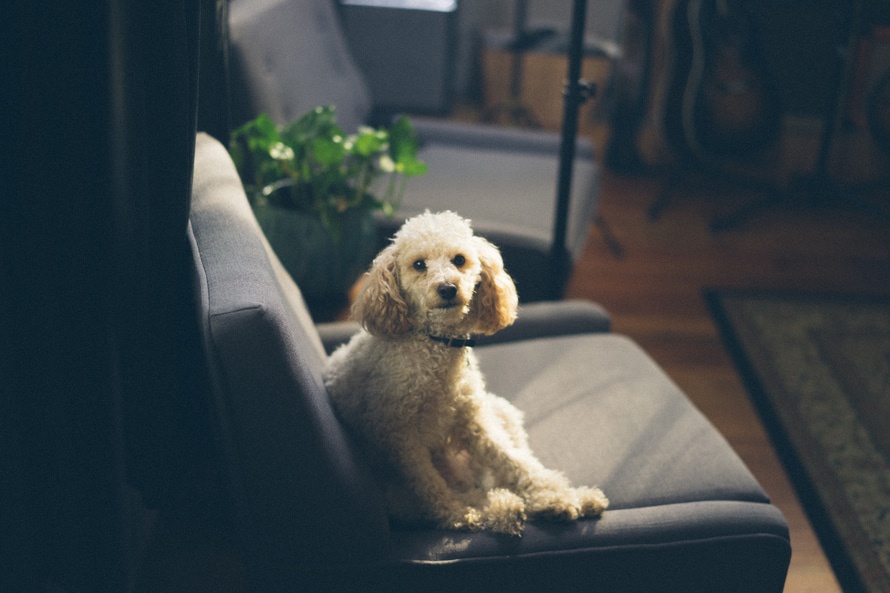 If hair is stuck to fabric or upholstery, remove it by wearing a slightly dampened rubber glove while rubbing your hand over the affected surface. The moisture will attract the hair and help you get rid of it. A sponge can serve the same purpose if you don’t have rubber gloves. Cut down on furniture-related cleaning altogether by using blankets to cover surfaces, too.

Tend to carpeted surfaces by running a pumice stone over them. It’ll catch the hair, but won’t get snagged on the material.

A vacuum works well for sucking up dog hair, but only if you maneuver the appliance in both ways across the carpet. Going against the grain helps loosen fur that’s become lodged in the fibers.

For hardwood floors, try a microfiber mop that’ll trap the fur instead of pushing it around.

As for getting dog hair off your clothes, use a lint roller. Alternatively, if fur has become attached to many of your garments, put them in the dryer, along with a dryer sheet, for about 10 minutes.

Dog hair doesn’t have to become a constant hassle. These tips can help you handle excess hair so competently, you just may feel tempted to start a second career as a dog groomer.

Dogs generally don’t like getting baths, and knowing that, some owners would rather not deal with bathing at all. That’s especially true if they’ve tried it once and had very bad experiences.

However, sooner rather than later, you’ll have to bathe your dog. Whether it’s because the canine has had a run-in with a skunk, went for a romp in the mud or vomited on itself due to an illness, sometimes baths can’t be avoided. Try these suggestions to keep bathing stress to a minimum for the both of you: 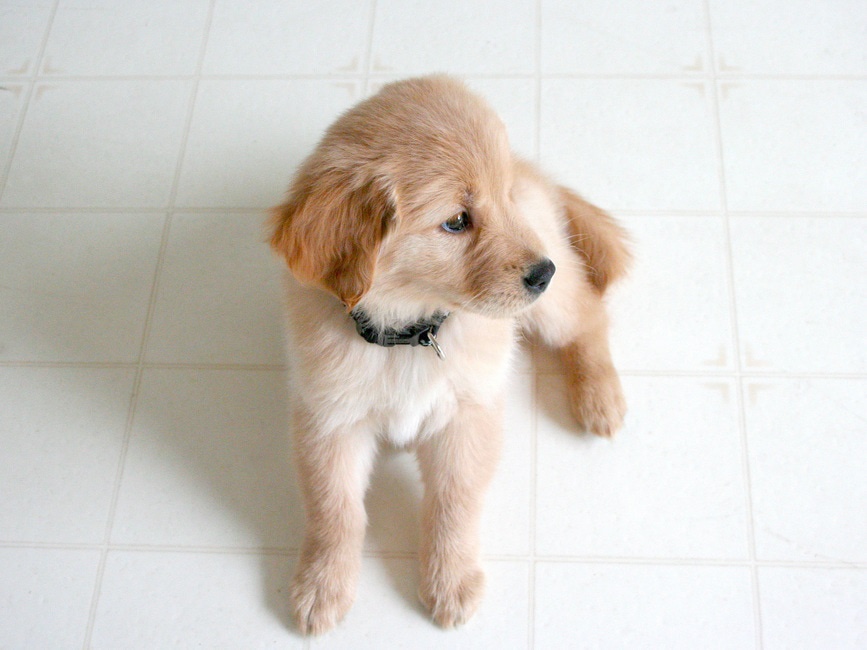 Preventing Your Dog From Eating Unsafe Foods and Beverages

Some dogs are excellent beggars, having perfected the art of appealing to your softer side, especially during human meal times. Although we’ve focused on cleaning up after your dog so far, this final section deals with tidying up after yourself and other members of the household so your dog won’t come in contact with dangerous foods. Many people know canines shouldn’t eat chocolate, but there are several other consumables that are bad for dogs, such as:

To err on the side of caution, immediately pick up anything that’s fallen from your plate, so there’s less of a chance your dog will eat it. If possible, raise your dog in such a way so it never becomes accustomed to getting human foods. You may want to also schedule your dog’s meal times so they occur just before the humans in your household eat, so your pet isn’t as concerned with what’s being served at the table.

By applying some of these suggestions to your everyday life, you’ll soon begin to realize cleaning up after your dog isn’t difficult. The trick is to have some consistent methods to rely upon, so you’ll immediately know what to do to stave off a canine cleanup catastrophe.

Is a Career in Healthcare Right for ...