Why Asking For Help Is A Sign of Strength

I used to think that asking for help was a sign of weakness; that it signified I was no longer “in a good place”. As if raising my hand would erase any previous growth and diminish my self-worth.

My worst charades featured me acting completely intact on the outside while in extreme distress on the inside. I was inclined to act this way. People pleasers have a tendency to behave in ways that best serve others instead of themselves. Inevitably, though, amidst this zombie-like trance of pretending everything was great, a major outside event occurs (I think of it as an attempted wake-up call from the universe), and my response the majority of the time was to just keep going, perpetuating the façade. It was physically and emotionally draining. As psychology today elaborates, “The energy it takes to maintain this illusion is enormous and, ironically, makes it harder to ask for help.” 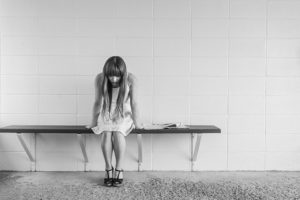 I woke up on the couch to the sound of the oven timer indicating the chocolate chip cookies I was baking for my copywriter’s birthday were done. Half asleep, I pulled the cookie sheet out of the oven and my wrist collapsed, scorching my thumb on the oven rack.

An honest response: everything is not great

The itchy burn blister eventually turned into a trail of red creeping up my arm. I called my dermatologist’s office – the nurse was the one who started to break through my trance. She was able to successfully alarm me stating that I must get to urgent care immediately. I went, was instantly admitted and received antibiotics. I was the fourth case of cellulitis up the arm at Northwestern’s ER that day. Since I acted swiftly, physically, I was going to be O.K.

It was not even me who initiated the request for help

Behaviorally, I began to tire of idling in my constant anxious-exhausted state. Following another injury, yet-another message from the universe that was guaranteed to reach me, it was a concerned family member who initiated the conversation regarding my disconnected self. I gave in! No more just keep swimming. I confessed that I was not my best self in this state and willingly received their support to better myself.

In Huffington Post’s “4 Words That Can Change Your Life” we are encouraged to create a culture that “champions the idea of vulnerability as a strength.”

Even now, it is not my first instinct to ask for assistance. However, given my fresh awareness that this is a healthy option, I remind myself to consider this. Sure, there are times when working alone is optimal, perhaps one example is right now as I am authoring this column, in full-screen mode, phone silenced, no distractions. Yet in other situations, I realize that assistance from others leads to positive relational exchanges on both the giving and receiving ends and promotes efficiency. Instead of viewing offerings from others as a sign that we are weak, we can try to remember that this is a healthy collaboration. It does not mean that we are not strong, self-sufficient individuals capable of great things (we totes are). It means that we are humble leaders, capable of graciously receiving thoughtful acts from others.

Signs Your Marriage Is On The Rocks ...